The High Cost of High-Tech Voting 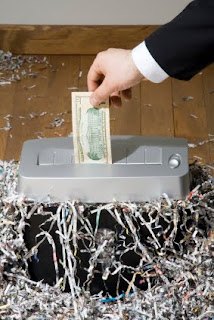 This year, as in the past two years, a bill is making its way through Maryland's General Assembly that would delay the purchase of a new voting system until 2016. While the intention behind it is to save money, the legislation (SB21 and HB174) would accomplish exactly the opposite.

At a 2009 hearing on a previous version of the bill, the Maryland Association of Election Officials (MAEO) turned out in full force, protesting that they couldn't afford to pay for a new voting system while they were still paying off the purchase loan on the current one. One election official from a small county testified that his county already was paying $50,000 and they could not afford to pay any more.

"Does that include operating expenses?" asked a senator on the Education, Health, and Environmental Affairs Committee hearing the bill. The man said that he didn't know.
The senator then questioned the second election official on the panel, who admitted that he had no idea what his county was currently paying.


The third member of the panel was Armstead B. C. Jones, Sr., who had served for several years as President of the Baltimore City Board of Elections before taking his current post as Election Director there. "How about you, Mr. Jones, how much are you currently paying per year?" asked the senator.

With so little awareness of the costs of the current voting system, it is not surprising that these well-meaning public servants have been so easily bamboozled by those who oppose the transition to optically-scanned paper ballots. To be fair, though, the financial transactions involving Maryland's current voting system have been so convoluted that it is almost like a game of 3-Card Monte (more on that in future posts).

According to a chart handed out by the bill's House sponsor, Del. Eckardt (R, Caroline, Dorchester, Talbot, and Wicomico Counties), Baltimore City's share of the purchase cost of the voting equipment probably averaged closer to $300,000 per year at that time.

But the purchase costs are just the tip of the iceberg. In fact, what has made this voting system so expensive is not just its purchase price tag — which, at $65 million, was substantial in itself — but its ongoing operating costs.

In the first three fiscal years in which the touch-screen system was fully operational statewide, the operating costs averaged $10.7 million per year — almost twice the amount of the annual payments on the purchase loan at that time. And Del. Eckardt's charts, which had the counties up in arms about the expense of a new voting system, did not take the operating costs of the existing touch-screen voting system into account. 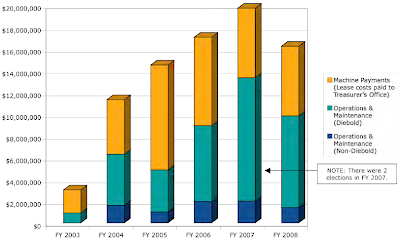 Until 2001, each Maryland county chose and paid for its own voting equipment, as is true in most American states. At that time, most counties -- 19 of Maryland's 24 jurisdictions -- used paper ballots counted in the polling place by optical scanners. Prince George's, Dorchester, and Allegany Counties used lever machines, and Montgomery County used punch cards. Baltimore City had just moved to an electronic voting system different from the one Maryland now uses.

After Florida's troubled 2000 presidential election (though Maryland's went smoothly), the Special Committee on Voting Systems and Election Procedures in Maryland issued a report in February 2001 recommending that Maryland move to a uniform voting system statewide. The committee evaluated and compared the voting equipment on the market at the time. Though the report noted that Maryland's experience with optical scanners had been generally positive, it recommended Direct-Recording Electronic (DRE) touch-screen voting machines which, it said, "represent the latest in sophisticated voting technology."

However, among the disadvantages it included a warning (pg 26) that proved to be prescient [emphasis added]:

The sheer volume of equipment (more than 18,000 voting units statewide) and the labor-intensive testing and support from highly paid technicians are what has made the touch-screen DRE system so expensive. So when the state forced counties to switch to DREs, it softened the blow by agreeing to split the costs with the counties, including the operating costs. However, even with the state picking up half the tab, counties have seen their voting system costs skyrocket since the switch. 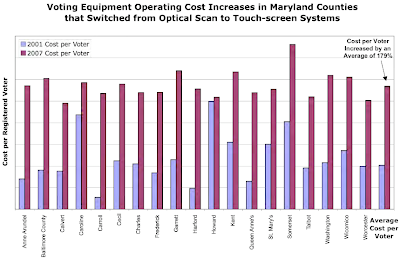 It's little wonder, then, that they are wary of being forced to buy yet another new system. But especially in these tight budget times, our counties can no longer afford the bloated behemoth that our touch-screen voting system has become.
Posted at 10:10 PM